A Walk Through Edinburgh

Discover the highlights of Edinburgh’s city center through a family-friendly private tour.

Meet your private, fully-licensed guide and let them take you from the top of Royal Mile (in front of Edinburgh Castle), to Charlotte Square in the new town, always going downhill.

Along the way, you and your children will see some of the most iconic places of Edinburgh, as well as some of its best kept secrets. It all starts at the top of the hill, near the entrance of Edinburgh Castle, where the so-called witches were once burned at the stake. You’ll make your way down the hill on the Royal Mile, and pass through narrow alleys (called closes) to reach the Scottish National Gallery and Princes Streets Gardens.

Along the way, your guide will tell you all about the history of the city and how it was built, from the Old Town on the hill to the New Town to the north.

To make it even better for the children, they will play an orientation game which involves cracking codes as if they were on a secret agent mission just like James Bond. After all, MI6’s best agent, 007, lived in Scotland, and one of the iconic James Bond actors, Sean Connery, is himself from Scotland as well.

This tour is available in the following languages : English, French, Spanish

Meeting Point: At the Hub on the Royal Mile

Is this tour private?
Yes, it is. No one else will be joining your private tour, and you will have your own private guide throughout the visit.
Is there a lot of walking during the tour?
Because our tours are designed for families with children, we make sure the distances are not too long. There are bakeries and ice-cream stores along the way, so you’ll be able to treat your children to something sweet during the tour if you want. That will keep them going!
Are the parents staying with the children or separated?
We always promote a family-bonding moment, where parents and children enjoy an activity together as a family. So, parents and children will not be separated. However, if you choose to send your children on this activity alone, it is possible, provided that a baby sitter accompanies the children regardless of the age, for insurance purposes (our guides are not responsible for the children).
Is it suitable for kids under 6 years old?
We recommend this walking tour for kids aged 6 or older, because they must know how to read and write in order to enjoy the fun-filled game booklet. Younger kids can join, and they will enjoy it, but they will not be able to play the game, unless a parent or older sibling helps.
Are we going inside the highlights mentioned?
You will only be seeing the exterior of the places mentioned in the description. Including the interior of the Scottish National Museum, for example, would extend the time of this walking tour, making it impossible to propose to families with children.
Can I bring a stroller or a wheelchair?
Technically, it is possible to bring a stroller or wheelchair. However, Edinburgh is a hilly city and there is a fair bit of walking involved, so strollers might be difficult to operate.
What happens if it rains?
The tour will take place, even if it rains. Just make sure you bring an umbrella or a rain jacket.
Will my teenage kids like the tour?
Sure they will. They might not want to have the game booklet, but since it is a private tour, our professional guide will adapt their speech to keep your teenagers engaged and entertained throughout the tour. 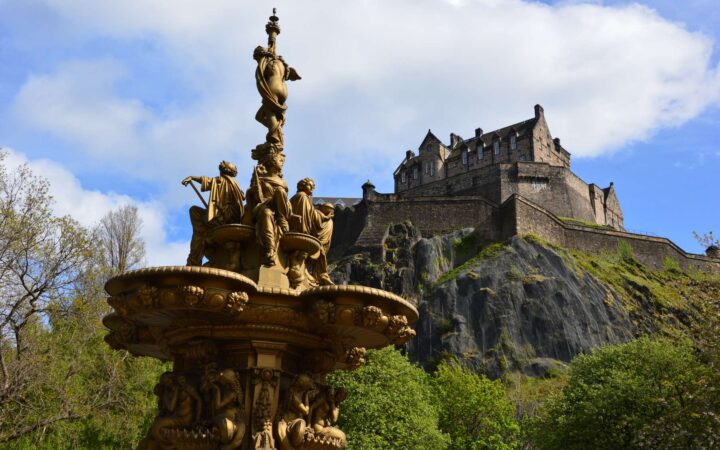 In order to make sure you have the best time during your stay in Edinburgh & the Highlands with your kids, we have designed unique, fun-filled, family-friendly activities.

More experiences in Edinburgh & the Highlands